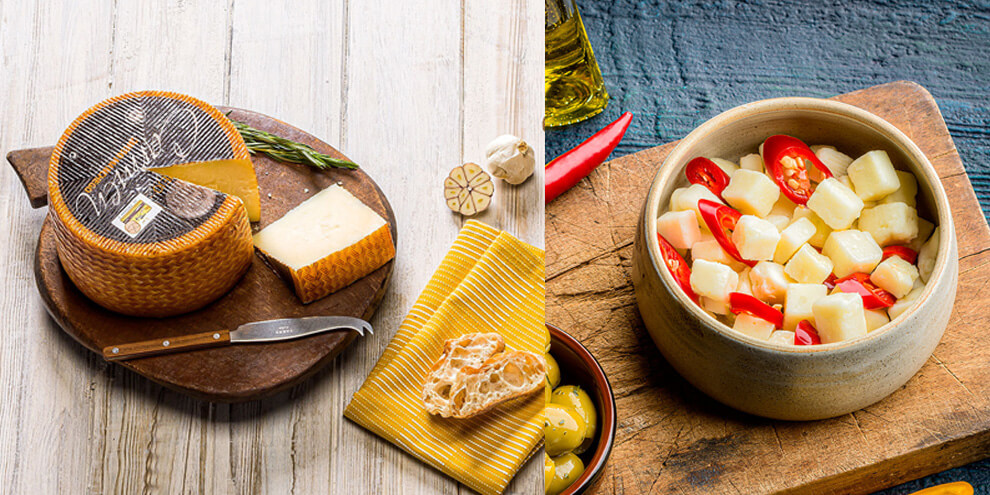 All You Need to Know about Manchego

Queso Manchego, informally known as Manchego, is a classic Spanish cheese with a wealth of history and tradition. Manchego is produced in the La Mancha region of Spain, it has a coated rind and is made from Manchega sheep’s milk. The rind has a distinctive basket weave pattern pressed into it which is reminiscent of the original weaved baskets the cheeses were pressed in. The cheeses inside is pale yellow in colour and nutty yet sweet in flavour.

There is evidence that the making and consuming of Manchego dates back to the Bronze Age, it’s due to this history and specific attributes of the region in which its made, that Manchego has a PDO (Protected Designation of Origin) status. Which means it can only be made with particular ingredients and to a certain authentic and traditional recipe to be named, Queso Manchego.

The cheese must meet certain criteria before it is authorised to be Manchego including:
• Produced and matured in the La Mancha Region of Spain.
• Made using whole milk of Manchega sheep from PDO approved farms within the designated area.
• It can be made with unpasteurised milk, at which point it is often labelled as ‘Artesano’ Manchego.
• It is matured for a minimum of 30 days for wheels weighing 1.5kg or less and a minimum of 60 days for larger wheels. The wheels can be matured up to a maximum of 2 years.
• Made in a cylindrical patterned mould of max 12cm high and max 22cm diameter.
• Each wheel is marked with an individual casein disk which is issued to the dairy by the Regulatory Council.
• The finished product also bears a numbered secondary Manchego PDO sticker – these are again controlled and issued by the Regulatory Council. When further processing the product this then replaces the casein label, which is lost during manufacture.

The Regulatory Council for the Manchego PDO is responsible for ensuring that all products sold as Manchego meet the PDO requirements. The council  also carries out visits to the farms and dairies to ensure that the PDO requirements are adhered to.  Every batch of Manchego cheese produced is independently sampled and analysed by the Regulatory Council to ensure only the best cheese is given the name ‘Manchego’. Manchego is available in different age ranges, ’semicurado’ is aged from 1 to 3 months, ‘curado’ is aged from 6 to 9 months and Viejo is aged from 9 months to 2 years. At each stage the cheese varies in distinct characteristics such as flavour, aroma, taste and texture.

Manchego is made in a particular process that starts at the creameries, where the milk is collected, the creameries are often placed in short distance of the pastures, making time spent in transportation very little. This milk is then heated in large vats where rennet is added as it is stirred. The heat and rennet together ensures the milk forms firm curds. The curds are then cut and separated to be drained of excess whey. Once successfully drained the curds are placed into moulds and compressed to squeeze out any remaining whey. Once pressed the cheese is then soaked in brine. Once soaked it is then set to age to lock in moisture and flavour.

Manchego is a very versatile cheese and is great with fruits, nuts, sundried tomatoes and figs. The younger Manchego cheeses are wonderfully mild and are great when mixed with fresh chilli slices and drizzled with olive oil. Manchego pairs well with Ximenenz or Harveys Bristol Sherry, the creamy nuttiness of a Manchego is complimented well with a good rich sherry, the depth and roundness of the cheese is enhanced by the sweet notes.