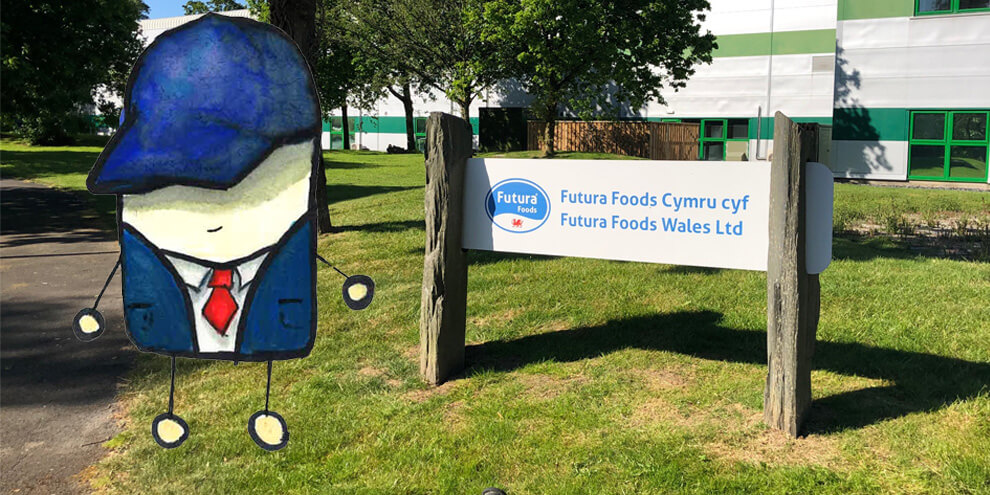 I would like to start this story by saying, I didn’t know I was of the calibre to be shipped off to Futura Foods Wales, I didn’t know I would be hand selected for something special and I didn’t know where I would end up. But this is my incredible story.
Hi, I’m Chedd, an agent of MiCheese.

I was a humble and friendly “country cheese-kin”, and where I’m from, on a farm in the middle of no where, there is nothing better to do that dream of new adventures, out there in the outside world.
I did what my dad always told me to do “Son, you’re destined for bigger and better things. So be patient”.

So there I was, minding my own business, waiting patiently at the creamery. When a forklift appeared out of no where, lifted me up alongside forty-nine of my friends and put us into a cold truck. No one knew what was happening, but I was sure this was our moment.

Word on the grapevine was that Futura Foods Wales in Penrhyndeudraeth had purchased us. Oh my, oh my, I was so excited; from what I’ve heard, there wasn’t another factory in Europe that I could go to, for me to achieve all my dreams. Futura Foods Wales is a state of the art factory with BRC AA accreditation. The 69,000sq foot facility offers flexible high quality product formats and packing solutions. The site cuts, blends and even extrudes, a lot for a small cheese like me to think about, it has many potentials for me. I couldn’t help but think, on the journey from the creamery to the factory, that “the world is my oyster!”.

When we finally arrived we met the store team; they welcomed us and treated us with care. They took us into the loading bay and packed us away in the stocks with so many other cheeses already there. As you can probably tell I’m quite chatty, so I made loads of new friends, from different places around the UK and Europe, and some were a cheddar like me but were coloured red – crazy right?! This was amazing and I felt right at home because the store team knew just what to do with us, they kept us at a nice 2°c, which was perfect for conserving all the beautiful attributes that I had when I was purchased.

So then it’s a waiting game. Waiting to see what the planning team were going to do with us all. We had heard about this factory and that any one of us could come out differently. Would I be grated, put in slices, blocked or transformed into a rope? There were lots of murmurs from the other cheeses, but I ignored it. I knew I would be something incredible.

Then one day, to my delight and surprise, someone came to get me…. He was wearing a shirt and tie under his coat and hair net – he wasn’t like the others. Why was he hand selecting me? My friends stayed in the store room or were shipped out by fork lift, yet I was taken by hand like this. Was I as special as I thought I was? ….

He told me of a project, but before I was allowed to start working on it, the man in the tie made me sign a non-disclosure agreement – meaning I cannot disclose anything specific about it… it’s top secret.
And just like that I was now a MiCheese agent.

I was then taken to a new part of the site, it was big and looked futuristic, it was a kitchen. It had big silver machines and other types of contraptions, more than you would find in a family home but less than what is in the big factory – a land in between. The man in the tie called it the “NPD world”, I was in new product development, I couldn’t believe my luck.

It was there I met the other agents of MiCheese, I was part of the elite group I had been wishing for. We were not all the same, some of us weren’t even cheese (and if I’m honest, some of them smelled quite strong!). But they were serious folk, the kind you’d find in a city or something, not the type of people you’d have found on my creamery back home.

The guy in the tie then explained our mission, to intermingle, get close, mix together and create something new, innovative, flavourful and exciting. We were up for the challenege.

So me and the other hand selected agents, with the help of our new human friend – the man in the tie, got to work.

There was some failure, some falling apart, some very bad taste combinations and more during the process, but eventually, we did it. We worked well together and produced something new and exciting. Then we were shared around with the man in the tie’s colleagues. Everyone on site was delighted by our success.

Which leads me to right now, I am waiting to be picked up as I am writing this. We have reached the final stage of our mission, we are on our way to meet a new buyer. If they like us, which I am confident they will, they will ask the brilliant team at Futura Foods Wales to produce more of us.

My dream of adventures could not have been better. Not only was I on a fantastic site with extraordinary friends and agents, but I also opened the door to a unique taste blend. I know this mission will be a complete success, and I will see you soon.

You won’t recognise me, but I will remember you.